After Harry Cohn saw the success of the Gene Kelly/Rita Hayworth team in the musical Cover Girl (1944), the two were promised this film. Sadly, it took another 15 years for it to reach the screen, and by that time Kelly (whose star-making role was in the original 1940 Broadway production) was bound to MGM and Hayworth was given the role of the older woman, with 'Kim Novak' now playing the younger woman.

It features three great (Richard) Rodgers and (Lorenz) Hart numbers, one for each of its leads: Sinatra sings "The Lady is a Tramp", Hayworth dubbed by Jo Ann Greer got "Bewitched, Bothered and Bewildered" and Novak (dubbed by Trudy Erwin) does "My Funny Valentine". 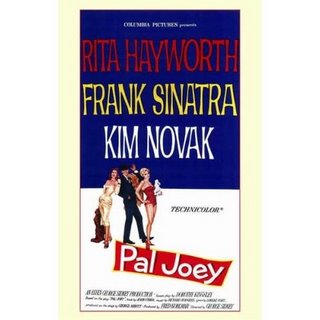 In the film, the character of Joey was changed from a dancer to a singer and the setting was changed from Chicago to San Francisco. In addition, Joey's character was softened by the inclusion of the last act in which Joey is reconciled with "Linda." Various locations throughout San Francisco were utilized for the film, including Telegraph Hill, according to a May 1957 Variety news item.

Hard (on) Fact..
- In the scene where Frank Sinatra sings "The Lady is a Tramp" and then dances with Rita Hayworth, there is a moment where she is supposed to say a line. However, she appears to stop herself and smile instead. This is because she realized during the take that Sinatra had an erection, and her surprise caused her to miss the line. However, her take was considered so priceless that it was left in. You can also see Sinatra strategically using the fur coat to cover his lower body as he exits the scene.
Posted by Jean at 8/28/2006 11:54:00 AM No comments:

The International Astronomical Union has voted to remove Pluto from the solar system--as a planet, that is.
Meeting in Prague over the past week, IAU members rejected a proposal to increase the number of planets to 12 by including Ceres, the largest known asteroid, which orbits between Mars and Jupiter; Charon, which has been considered Pluto's moon; and 2003 UB313, an object nicknamed "Xena" that was discovered in 2005 orbiting far beyond Pluto.

Pluto is now considered a "dwarf planet" because it has an oblong orbit that overlaps with Neptune's orbit.

Ceres and Xena will also be considered dwarf planets. Charon is simply one of the "small solar system bodies."

Hubble Space Telescope in February that confirmed the existence of two new moons orbiting Pluto. Pluto and Charon are gravitationally locked so the same sides always face each other. They orbit each other every 6.3 Earth days.
Another object that is now a dwarf planet is officially named 2003 UB313, but it is better-known as "Xena." It was discovered in 2005 by Michael Brown, Chad Trujillo and David Rabinowitz from images taken in 2003 and is slightly larger than Pluto.

The name Xena comes from the TV series "Xena: Warrior Princess." Its moon is called Gabrielle, named after Xena's sidekick on the show.

The name has gained popularity because the object fits the description of astromer Percival Lowell's Planet X from the early 1900s. But some astronomers object to officially calling it Xena because the planets are supposed to be named after characters from mythology.

Tom Cruise's production deal turned out to be mission impossible. Which is no surprise now, considering it turns out that the studio holding the cards frowns on couch-jumping.

The Wall Street Journal reported Tuesday that Paramount Pictures has decided to not continue its partnership with Hollywood's most powerful celebrity, citing his recent off-camera conduct as the main reason it had for discontinuing the 14-year relationship.

"As much as we like him personally, we thought it was wrong to renew his deal," the big cheese himself, Viacom Chairman Sumner Redstone, told the Journal. "His recent conduct has not been acceptable to Paramount."
Posted by Jean at 8/22/2006 09:20:00 PM No comments: 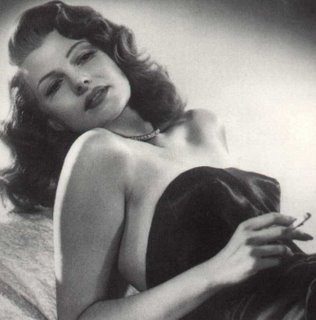 Highlights include a rare interview with the star's daughter, Yasmin Aga Kahn, as well as never-before-seen color home movie footage from the 1940s, 1960s and 1970s, rare family photographs and commentary from Hayworth herself throughout the program from an interview taped shortly before Alzheimer's ravaged her memory.
Narrated by Kim Basinger.

How did San Francisco become so popular with gay people? 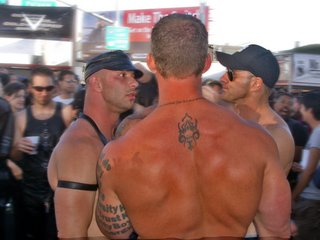 In addition to its earthquakes and the Golden Gate Bridge, San Francisco is widely known for its high population of gays and lesbians. How did so many gay people come to call the city by the bay their home? The answer may surprise you...

As it turns out, the military is the main reason so many gay men settled in San Francisco. During World War II, the United States armed forces "sought out and dishonorably discharged" homosexuals. Many men who were expelled for being gay were processed at San Francisco bases. 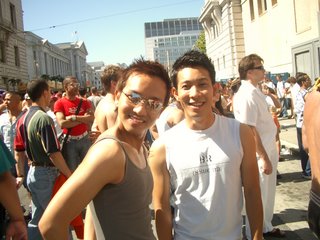 This site agrees, stating San Francisco was indeed a point of departure during World War II. Gay men often stayed in the city after completing their military service. Since then, San Francisco's gay and lesbian population has continued to grow.

In the 1960s, an activist organization called the Society of Individual Rights (SIR) gained steam in San Francisco and made many advances in gay rights. Additionally, the 1978 murder of gay city supervisor Harvey Milk inspired residents, particularly those in the city's Castro district, to speak out for gay rights. Today, San Francisco has the highest concentration of gay men, women, and same-sex couples in the country and possibly the world.

Die Mommie Die!: Why Not Me - DanoramaProductions.com

"TNT - Taylor 'n Turner - Together They're Terrific!" So went the ad campaign for MGM's Johnny Eager (1942). And indeed they were. Robert Taylor and Lana Turner, two of the most beautiful faces ever to appear onscreen, were dynamite in their one and only film together.

Their steamy onscreen chemistry carried over to real life, as the married Taylor fell hard for the sexy 21-year old blonde bombshell. In her autobiography, Turner admits to a romance, but not an affair. She says she "flirted," but she didn't want to be responsible for breaking up Taylor's marriage to Barbara Stanwyck. Taylor, however, told his wife that he was in love with Turner and asked for a divorce. Turner says she then cooled the flirtation, and Taylor stayed married. Whatever the truth, the attraction between the two stars only helped the film.

Taylor and Heflin recreated their roles for a Lux Radio Theatre broadcast on 21 Jan 1946. Susan Peters portrayed "Lisbeth" in the radio production, and Cy Kendall, who portrayed "Bill Halligan" in the film, portrayed "Marco." In an article in Saturday Evening Post entitled "The Role I Liked Best," Heflin cited Johnny Eager as his favorite performance.

As for exorcising Robert Taylor's glamour-boy image once and for all...well, as Wanda Hale gushed in the New York Daily News, "Taylor makes as handsome a gangster as you'd find if you'd go through the underworld with a fine-tooth comb." Still, glamour or not, Taylor's performance Johnny Eager is one of his best.

WINGS (1927) The first Best Picture winner was also noted as portraying the first on-screen male-male kiss on the lips, when a handsome young soldier John "Jack" Powell (Charles "Buddy" Rogers) placed a lingering kiss on the mouth of his dying friend David Armstrong (Richard Arlen)
Posted by Jean at 8/08/2006 08:32:00 PM No comments:

"I've been on a calendar, but never on time."

"Remember the time ..when we fell in love" 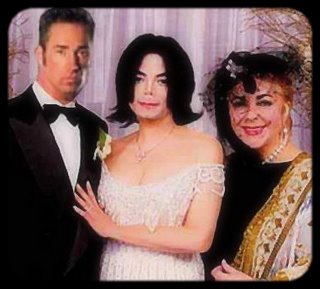 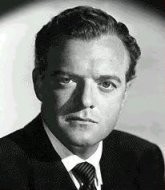 one of America’s most beloved film actors Van Heflin was one of the most unusual and talented actors ever to appear on screen. Known as an "actor’s actor," he gave strong performances without resorting to showy flourishes and histrionics.He had both starring roles and character parts. He was a tall, medium built man, with wavy sandy-hair, a lived-in face, with sleepy eyes and an introverted demeanor. He was equally adept at playing bad guys or heroes and he gave them an air of complexity. In private life, he shunned the Hollywood limelight and his career suffered. (Eric Niderost : the classic image)

An Academy Award-winning actor whose career spanned 45 years and 57 films, Heflin appeared mostly in dramatic roles, winning his Oscar for his supporting performance in Johnny Eager (1942). He appeared opposite Barbara Stanwyck in The Strange Love of Martha Ivers (1946), B.F.'s Daughter (1948), East Side, West Side (1949), and enjoyed starring roles in several westerns, most notably Shane (1953) and Stagecoach (1966). He also made a couple of forays into the musical genre, starring opposite Judy Garland in Presenting Lily Mars (1943) and Till The Clouds Roll By (1946), then working under her husband Vincente Minnelli's direction for Mad 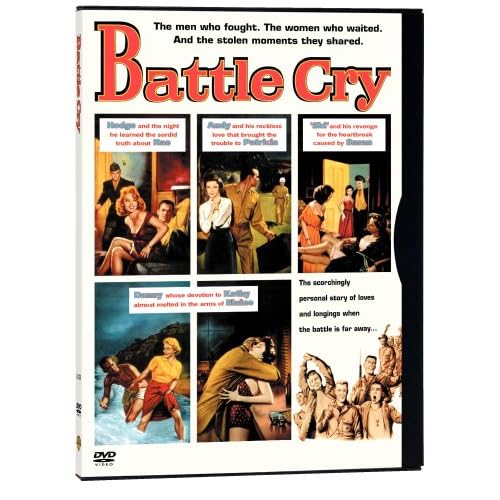 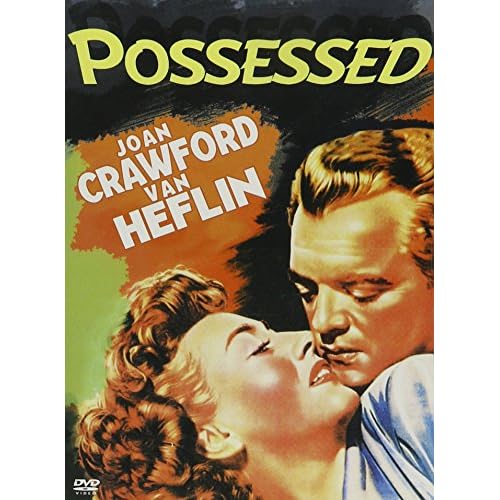 Did you feel it?

The quake struck just after 8 p.m. in Sonoma County, about 42 miles northwest of San Francisco, the U.S. Geological Survey said.

No one was hurt and there were no initial damage reports, according to a Sonoma County sheriff's dispatcher.
Posted by Jean at 8/02/2006 06:53:00 PM No comments: