Not the girl next door 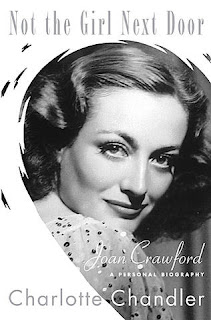 Charlotte Chandler became one of my favorite writer & Biographer these days . "A girl who walk home alone" was he best Bette Davis Biography I 'd read yet. I recently just pick up a copy of " Ingrid" last week . But the book that I 'm waiting to be release is "Not the Girl Next Door: Joan Crawford, a Personal Biography"( release on February 5th) .

After Christina Crawford publish a bestselling memoir, Mommie Dearest,Crawford was portrayed as an abusive mother who had no understanding of, nor feeling for, her children. it became a movie, the book permanently destroy crawford reputation . But Chandler finds another truth in conversations with Cathy Crawford, who told her, “Our Mommie was the best mother anyone ever had.”

“Charlotte Chandler’s Not the Girl Next Door illuminates what it meant to be a movie star in the golden age of stardom. This is a story of the Hollywood that was, and is no more.” -- David Brown

“The former Lucille LaSueur’s story may never have been better told.” -- Booklist

“Charlotte Chandler shares the life of her subject, and then she shares it with the reader.” -- Sidney Sheldon

“After reading Charlotte Chandler’s book, I found myself wishing Joan Crawford had lived next door to me.” -- Arthur Hiller

CHARLOTTE CHANDLER is the author of several biographies of actors and directors, among them Groucho Marx, Ingrid Bergman, Federico Fellini, Billy Wilder, Alfred Hitchcock, and Bette Davis. She is a member of the board of the Film Society of Lincoln Center. Chandler is active in film preservation and lives in New York City
Posted by Jean at 1/30/2008 12:00:00 PM No comments:

My Journey from Cloverfield to 27 dresses 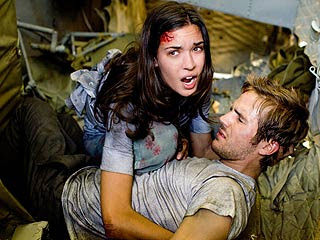 Last night I was so eager to see one of the most participated monster movie this year "Cloverfield" opent this weekend at 43 million. So I bought a ticket at the theatre waiting eagerly . Theatre was Pack .I thought it would be fun...
The first 1o minutes or so of “Cloverfield” takes us to the going-away party thrown for a dude who has to move to japan . Then the monster attack . Then they run .The movie try to be cool by filming a whole movie in hand-held style cam. But the guy who suppose to be the one who hold the cam , not only try to talk stupid geeky joke but also didn't know how to hold a camera .The result is a lot of people feeling dizzy (I am one of them) . After 20 minute I saw a few people start to walk out . So I following them . One I stand up I feel horrible. On my way out i went straight to the first trash I saw and start to puke (Nasty Huh?) 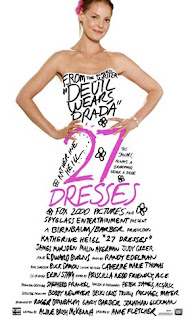 After a little clean up in the restroom . I feel really up set and hurt by this A budget B-movie . So I decide to sneak in to the near by theatre to see pleasantly but predictable romantic comedy "27 dresses "

I have no idea who Katherine Heigl is . But I'm sure Ed Burn was hot. I'd nerver like James Marsden but I have to admit that he was really adorable in this movie . As I said the movie was cute but predictable . It's kind of a movie that you can wait for DVD .Not much to say.

After movie was over I was back to cloverfild again . I thought I'm just gonna give this movie another chance .. the result another throw up ..YIKE

Email ThisBlogThis!Share to TwitterShare to FacebookShare to Pinterest
Labels: Movie I saw

Auberge "La Lucarne aux Chouettes" - Leslie's Caron delicious place in Burgundy... call it a hotel, a restaurant, a bed and breakfast, an inn... it is The Owl's nest... your favorite place in France!... Renowned for great food and wine in the wine country par excellence. Your lunch and dinner under the trees and flowers lining the terrace, right on the river and sweet sleep follows under the canopy of antique beds, collected by Leslie herself with a passion for antiques. 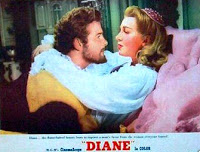 At Castro theatre A couple week a go I had a chance to see one of Lana Turner least well-known MGM movie DIANE . It’ not suppose to be on schedule . But the Print of Elisabeth Taylor “the VIP” has a technical problem . So they replace DIANE instead .

Lana Play Diane de Poitiers who was a noblewoman and a fixture at the courts of Francis I and Henri II of France. She became notorious as the latter's favorite courtesan, though she was 18 years his senior.

Also in the movie Roger Moore (one of his pre James Bond ) was a good choice of Henry II . I have to admit that the movie is a lot better than I thought . It show that My girl Lana can really act. Notable mention was a beautiful score by Miklos Rozsa and a wonderful costume by Walter Plunkett (Gone with the wind , Raintree Contree ) I mean just only costume is already worth the ticket.

Email ThisBlogThis!Share to TwitterShare to FacebookShare to Pinterest
Labels: Did you Know??, Lana Turner, Movie I Like, Movie I saw

“It’s an odd thing, but anyone who disappears is said to be seen at San Francisco.”

DID YOU KNOW??? :From Here to Eternity 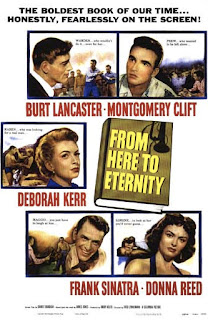 Email ThisBlogThis!Share to TwitterShare to FacebookShare to Pinterest
Labels: Did you Know??

"We are all very disappointed that our traditional awards ceremony will not take place this year and that millions of viewers worldwide will be deprived of seeing many of their favorite stars celebrating 2007's outstanding achievements in motion pictures and television,"

Email ThisBlogThis!Share to TwitterShare to FacebookShare to Pinterest
Labels: oscar

NOT just any woman


" I wasn't working that day so I came to the studio very well dress ( I thought) in slack with my hair back and a scarf around it. LB look at me turn absolutely red , and told me to go back home and dress the way a star should be seen in public, and never appear looking the way just ' any woman" would. So I numbly let his driver take me home and come back an hour later looking absolutely elegant . I never again appear in public , at least consciously looking like " just any woman" . To this day some little or big voice inside of me says " Joan Go out there looking like a star " and I'm damn uncomfortable when i don't"

"In my Metro Years I think more money was spent on my wardrobe ,per movie, than on the script. Watch the credit of the older movies and see how prominently name like Irene , jean louis , Edith Head and above all Adrien , appear . But , obviously , it was something public wanted. "

"The Crawford wardrobes had some practical application because they could be copies so easily , all the way down to Mainboocher to sears. So variety reason I became conscious of the way i dressed, even in private.

But doesn't every woman love well designed clothes, and to know that she can afford them? The feel good fabrics , the confidence that comes with knowing you're wearing a Jean Louis or an Adrian rather than a May company off the rack?? and Furs ? And Jewels??"

"God dammit , if people want to see Joan crawford the star they were going to see Joan crawford the star ,not character actress in blue jeans . They paid their money and they were going to get their money 's worth. If all sound like snobbery or affection -it isn't . In my day a star owed the public a continuation of the image that made her a star in the first place"

Daisy Kenyon to be release in March 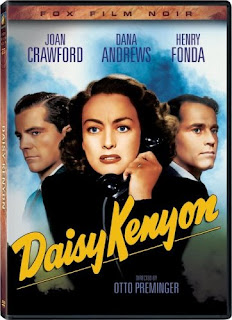 My favorite Director + My favorite diva Daisy Kenyon will be release on DVD March 11 ,2008


Also Jaspace has been link in Joan Crawford German Wikipidia . How cool is that!!